Wall Street firm says there is now a ‘strong case’ for gold over bonds, stocks

“We show that from current equity valuations and from similar points in previous cycles gold and equities give more similar returns … [to] risk assets such as equities,” Bernstein said.

“A material shift in geopolitical risk and a near-record build up in government debt make other potential risk-free assets more questionable and also bring a temptation to create inflation, thereby further enhancing the case for gold,” the note added.

Bernstein is tracking two key measures, both of which are at levels not seen since World War II: global government debt and central bank buying of gold. The former “creates a temptation to manufacture inflation,” Bernstein said. The latter is a “trend that is likely to continue for as long as the US share of global GDP continues to decline,” the firm said.

This is Bernstein’s key gold chart 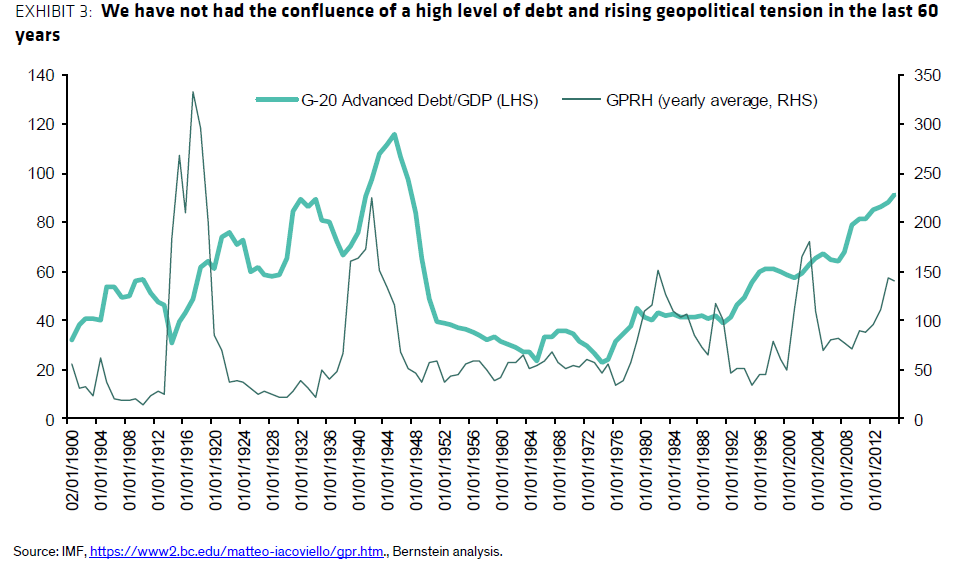 The current geopolitical environment is heading toward a period in which neither stocks nor bonds will work – therefore pushing investors to gold, Bernstein said.

“The problem with holding gold is that the long run real return is zero. However, it is also apparent … that there are periods when the other traditional source of ‘risk free’ returns, in the form of Treasury bills, fail to deliver risk-free returns,” Bernstein said. “These tend to be in periods of geopolitical uncertainty or after large build-up of debt.”

During severe downturns in the stock market, Bernstein found that gold “is the most defensive” commodity. The firm looked at four previous market downturns — 1972 to 1974, 1987, 2000 to 2002 and 2007 to 2009. Across the four scenarios, gold mining stocks closely track the commodity’s value and “at least manage to achieve a positive benchmark-relative return,” Bernstein said.